This is one of the most important Buddhist centers in Siberia and the Far East and the residence Khambo Lama, the head of Russian Buddhists. The temple complex is located in the foothills of the Khamar-Daban 29 kilometers from the capital of Buryatia - Ulan-Ude. He began to build in the Soviet times - in 1945, escaped from repression Lama. Now Ivilginski temple - is a complex of Buddhist buildings. Gradually small datsan turned into a large monastic complex. Tsogchen arc - the cathedral church (built in November 1976); Maydarin-sume - wooden church (built in 1970); Devazhin-sume - Paradise Amitabha Buddha - adobe two-storey building (built in 1970); Sahyuusan-sume - dugan wooden square shape (built in 1986); Choyra-Arm - faculty Choyra philosophy - Tsogchen first arc (Built 1947-1948); Greenhouse for the sacred Bodhi tree; Palace Twelfth Khambo Lama Dashi Dorzho Itigelov. In the 90s there appeared the Buddhist Institute, which trains new lamas. The training lasts for five years and includes a knowledge of philosophy, iconography and even medetsine. Ivilginski temple is the center of Buddhism in Russia, attracting many pilgrims and tourists from all over the world. The monks treat the congregation with the help of Tibetan medicine, make astrological predictions 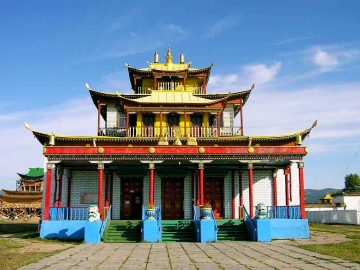 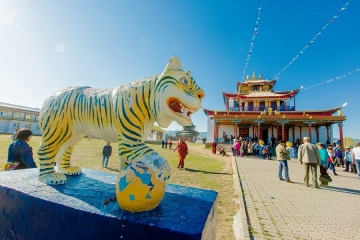 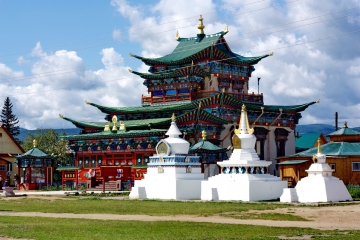